A Short History of Hearing Aids

A Short History of Hearing Aids 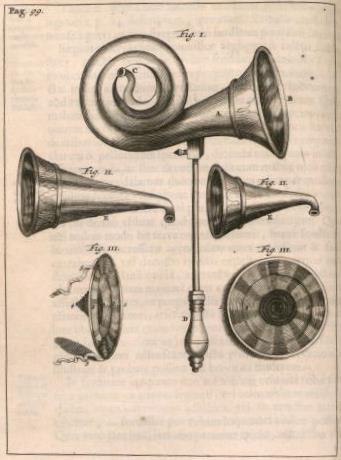 We might take it for granted that our hearing aids are scarcely noticeable, can be operated with our cell phones, and can discern between speech and background sound. What we might not realize, however, is that those functions are the results of 400 years of research, design, and improvement.

Even 5 years ago, hearing aids could not generate the clarity of sound produced today. To see why, let’s track the history of hearing aids—beginning today and traveling backwards—to see how hearing aids would have handled your hearing loss in four different years: 2016, 1985, 1940, and 1650.

It’s 2016 and you’re searching to treat your hearing loss. You open up a web browser, search for a local hearing care provider, complete a brief form, and schedule a consultation.

At your hearing test, your hearing is evaluated using sophisticated computer technology that accurately assesses your hearing. Then, with the help of your hearing practitioner, you select a hearing aid that meets your needs from a large selection of models.

Then, your hearing practitioner programs your new hearing aids to amplify only the sounds and frequencies you have trouble hearing, giving you crystal clear sound without distortion.

If you were to tell someone in the 1980’s that this would be the process, they wouldn’t have thought it was possible.

So what did make it possible? In a nutshell, digital technology.

For the majority of their history, there was no way for hearing aids to distinguish between different sound frequencies. Hearing aids would magnify all inbound sound, including background noise, creating distorted sound.

The digital revolution solved that challenge. With digital technology, all information can be converted, saved, and manipulated as combinations of 0’s and 1’s. Digital technology allowed hearing aids to transform sound frequencies into digital information, which could then be sorted according to which sounds should be amplified (speech) and which should be restrained (background noise).

The first all-digital hearing aid was produced in 1995, and since then the technology has improved tremendously, eventually to include wireless functionality.

Now it’s 1985 and you’re looking to treat your hearing loss. You can forget about searching for a local hearing care provider on the internet because the first commercial internet service provider won’t be founded until 1989.

You would have to use the phone book, depend on recommendations, or drive around the neighborhood to find a hearing care practice.

After reserving a consultation and having your hearing screened, your choices for hearing aids are quite restricted. With no microprocessor and digital technology, hearing aids were constructed with a series of transistors. This adds size and increased power requirements, resulting in larger batteries and larger hearing aids.

Also, without the benefit of digital technology, the hearing aid can’t differentiate between various frequencies of sound. Hearing aids receive inbound sound and the transistors act as basic amplifiers, amplifying all sound. So if you’re in a loud area, speech recognition will be nearly impossible.

It’s 1940 and you’re interested in purchasing a hearing aid. Transistors haven’t been applied to hearing aids yet, so your options are confined to vacuum tube hearing aids.

And once again, without digital technology, the hearing aids can only act as straightforward amplification devices, making all inbound sound louder. The hearing aids can’t enhance speech and cannot remove background noise.

Let’s travel all the way back to 1650. There’s no digital technology, no transistors, and no vacuum tubes. As a result, there is no way to convert sound into electrical currents that can be amplified.

With electrical amplification out of the question, your only possibility is mechanical amplification by focusing and compressing sound into the ear canal, such as what happens when you cup your hands around your ears.

This would be the only technology readily available to people with hearing loss for the next 250 plus years.

Each generation of hearing aid has made a significant upgrade over the previous generation. The question is, what’s the next great milestone in the history of hearing aids?

Will we eventually be able to improve natural human hearing, rather than simply restore it?